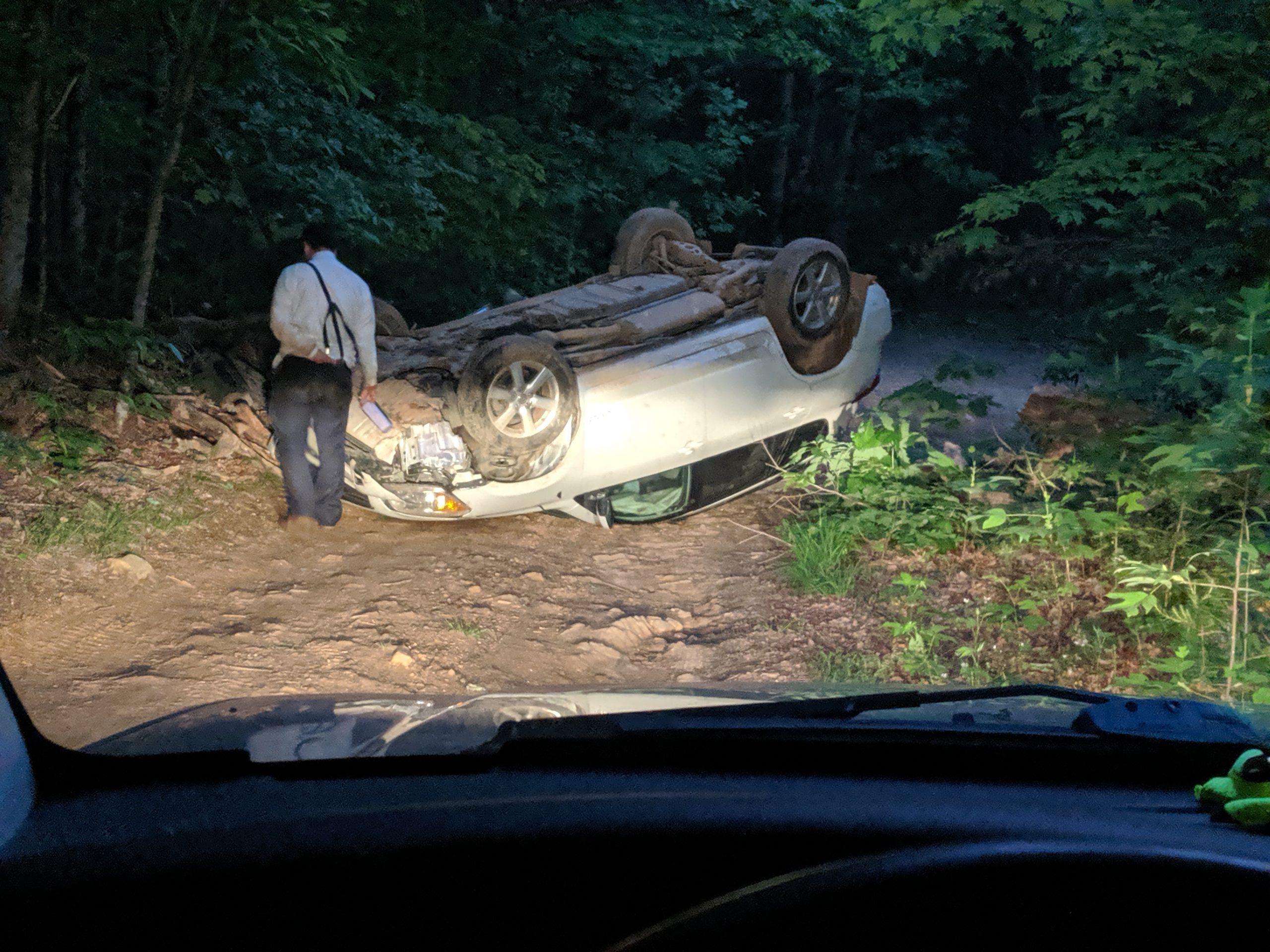 This past weekend I experienced first hand how Amateur Radio can be used in an emergency situation when other methods of communications fail. A routine off road trip turned into a rescue situation as I came across a rollover accident on a trail. Special thanks go to the Alford Memorial Radio Club and the participants of the “Turnip Truck Net” on their W4BOC repeater.

An Evening Off Road

This past weekend my girlfriend and I took an evening off road trip up into the mountains. Being an evening trip, I decided to stay to roads and trails that I was familiar with. The trail we took brought us close to the summit of one of the ridges, and another road led back down into the next town.

While at the summit, I decided to test and see what kind of reception I had to nearby repeaters on the radio. I had great signal into several local 2 meter repeaters, and also managed to get a signal through to a D-STAR repeater. Since I was using an Icom 5100 with built-in GPS, this put my location on the APRS map. At the time, I didn’t realize how useful this would be.

The road down to the next town is a very technical trail. Technically it’s an old county road, but it hasn’t been maintained in years. This trail requires a four-wheel drive vehicle with a relatively high clearance. It definitely gave my 4×4 a solid workout as we climbed from boulder to boulder down the road. I am not sure how often the road is traveled, but I am certain that this trail goes for weeks at a time without seeing any traffic.

Our progress was halted exactly one mile down the road as we came across an overturned vehicle. I approached the vehicle to assess the damage. I assumed this was an older wreck that had been left until the driver could find a way to recover the vehicle, but I wanted to put my fears to rest that someone could have been lost to the accident. As I approached, I realized that the driver was still present at the scene, fortunately uninjured.

I spoke to the driver of the vehicle, who stated that he was uninjured and that no one else was in the vehicle. He also said the wreck had happened only 20 minutes prior to me coming across it. There was no cell signal available, but I could faintly hear activity on one of the local club repeaters (Alford Memorial Radio Club). The incident happened around 11:30 PM, but fortunately the repeater operates a late-night net on the weekends. I told the driver that I was going to get back to the summit to get help, and he decided to wait with the vehicle.

As I climbed back up the trail, I listened until the signal from the active repeater was clearer. Once we had a good signal, I made the call: “Break, break, WX4WCS, emergency.”

The net control operator paused the net and took the emergency traffic. I let him know where I was (using the GPS coordinates of the summit), that there had been a rollover accident on an off road trail, and that we needed assistance. The net controller looked up the GPS coordinates, determined what county needed to be contacted, and designated another individual to relay the traffic to the local sheriff’s office in my area.

At this point, I remembered that I had hit a D-Star repeater from the summit earlier, and let him know that my location was also available on the APRS map to confirm the coordinates. This allowed other individuals monitoring the situation to keep tabs on where this was located.

Up until now was the easy part, but it turned out that the summit was the line for three different counties. The entrance to the road we came up was in one county, the overturned vehicle was in another county, and the other end of that road was in a third county. After the other amateur radio operator (I’ll refer to him as the liaison) relayed the information to the first county, they said they would send out a deputy. However, the deputy informed his dispatcher as he neared the site that he had reached the county line, and was returning.

At this point, the call was transferred to a second county. Their dispatcher was informed that I was on the summit, and that the vehicle was down a rough 4×4 only road. The liaison let me know that the dispatcher had told him that they were sending a deputy in a 4×4 truck.

Five hours after the initial call, two deputies finally arrived at the summit. While they did arrive in an SUV, it was a rear-wheel drive pursuit vehicle with street tires. Hardly equipped to make it down the next road. One of the deputies looked down the road and stated that the wreck would be in a third county, and called their dispatcher.

As the two departments continued to go back and forth about who’s responsibility it was to get the driver and assess the wreck, I volunteered to drive one of the deputies down the road to the scene, examine the wreck, and retrieve the driver. When we finally made it down, the deputy took photos of the vehicle and of the driver to give to the deputies from the other county. We loaded up the driver and drove him back to the summit. He stated that his GPS told him that the unmaintained county road was the way home, and he overturned after hitting a rock at a decent rate of speed.

When we finally returned to the summit with the driver, it was close to 6:30 AM, roughly 7 hours after the start of the incident. He was placed in the deputy’s SUV, and they went to meet with the deputies from the other county to determine what to do from there.

There are several lessons that can be learned from this incident. First and foremost, always be prepared for anything, especially when traveling off road. Have recovery gear, emergency supplies, first-aid kits, food, and water. Even if you don’t have an emergency yourself, you never know what you will come across in your travels.

Second, when in a remote location, don’t rely on an immediate response time from law enforcement or rescue personnel. Depending on your location, it may take several hours for emergency responders to reach you. However, while a long response time should be expected, 7 hours to retrieve the driver is absurd. The fact that the various departments spent more time arguing over jurisdiction instead of worrying about the condition of the drivers was extremely concerning.

Ham radio, APRS/DPRS, an active repeater, and hams willing to be of service in an emergency situation really did save the day. Being in a location with limited cell reception, the only other option for getting help would have been driving back down the mountain and into the nearest town. It’s 2019, and most people think that if they have a cell phone they will always be able to call for help, but that’s not always the case.

One thought on “Using Ham Radio in an Off Road Emergency”